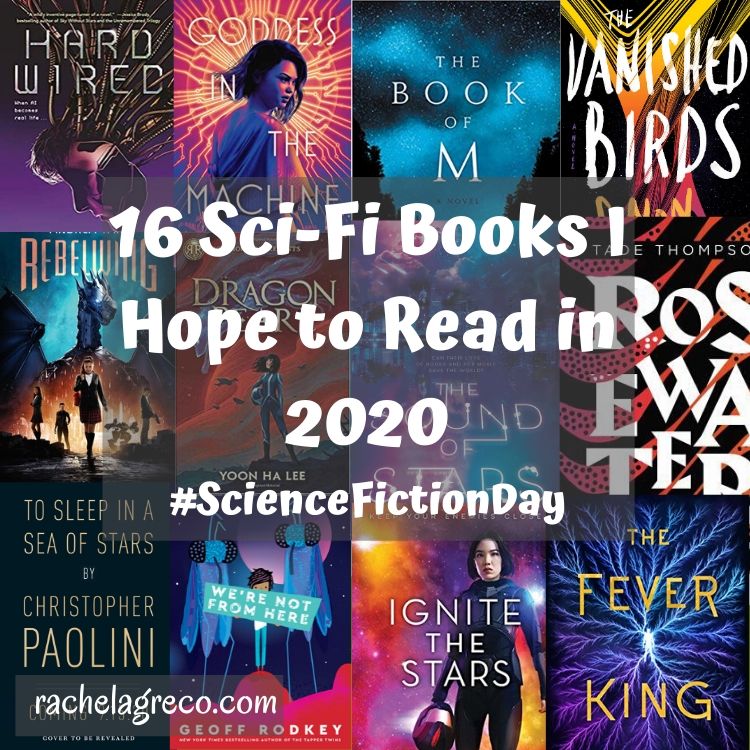 Dragon Pearl by Yoon Ha Lee: A girl with fox-magic, a quest involving gamblers, pirates, and vengeful ghosts, and hints of Korean mythology in this space opera has me intrigued.

Sanity and Talullah by Molly Brooks: A graphic novel about two friends trying to find their three-headed kitten while saving their space-station home. Sounds like fun!

We’re Not From Here by Geoff Rodkey: an interesting perspective, since the MC’s the alien on a planet populated by giant mosquito-like creatures. His voice, at least from the blurb, sounds snarky and hilarious.

Goddess in the Machine by Lora Beth Johnson: Andra wakes up from her cyrogenic sleep just 1,000 years too late! Can’t wait to find out what happens as she explores this unfamiliar planet with an exiled prince. Release Date: June 30, 2020

Ignite the Stars by Maura Milan: A notorious outlaw is actually a 17 year-old girl who’s a criminal mastermind and unrivaled pilot. This book’s bound to be a wild ride!

The Fever King by Victoria Lee: I’m captivated by the concept of technology and magic merging together. Also, the futuristic land is named after my current home state: Carolinia.

The Vanished Birds by Simon Jimenez: The consequences of time travel are seen in the lonely Nia Imani until she meets a boy who can only communicate via his wooden flute. How neat and bizarre is that?! Release Date: January 14, 2020

Rebelwing by Andrea Tang: Dragons! A Cybernetic dragon, to be precise, which rescues Pru from prison and draws her into a revolution she has no desire to lead. I can already feel my heart speeding up… Release Date: Feb. 25, 2020

Hard Wired by Len Vlahos: I’m not sure how you can think you’re a normal boy and then all of a sudden realize you’re an A.I. experiment, but poor Quinn does! I’m already rooting for him to win! Release Date: April 28, 2020

To Sleep in a Sea of Stars by Christopher Paolini: I loved the Eragon series, so I’m thrilled Paolini has another book soon to hit the shelves! This one seems to be quite different from his previous series–Kira finds an alien relic that changes her life forever. Can’t wait! Release Date: September 15, 2020

The Book of M by Peng Shepherd: People’s shadows start disappearing in a near-future. Those affected gain powers but lose their memories. This mystery is already threatening to keep me awake tonight.

The Calculating Stars by Mary Robinette Kowal: I’m not actually sure if this is historical fiction, sci-fi, or a mix of both; I’ll let you know after I read it. The MC, a female calculator (see the movie: Hidden Figures), wonders why she and other women can’t help save their dying planet by going into space too.

Anyone by Charles Soule: As someone who has a husband, I think it would be hilarious and potentially helpful to be mysteriously transported into his body. But if a whole culture can do this, that’s another story with a dizzying number of ramifications.

Rosewater by Tade Thompson: I’m intrigued to meet the members of the community formed around a mysterious alien biodome and see what lies inside.

What sci-fi books are you most looking forward to reading this year?