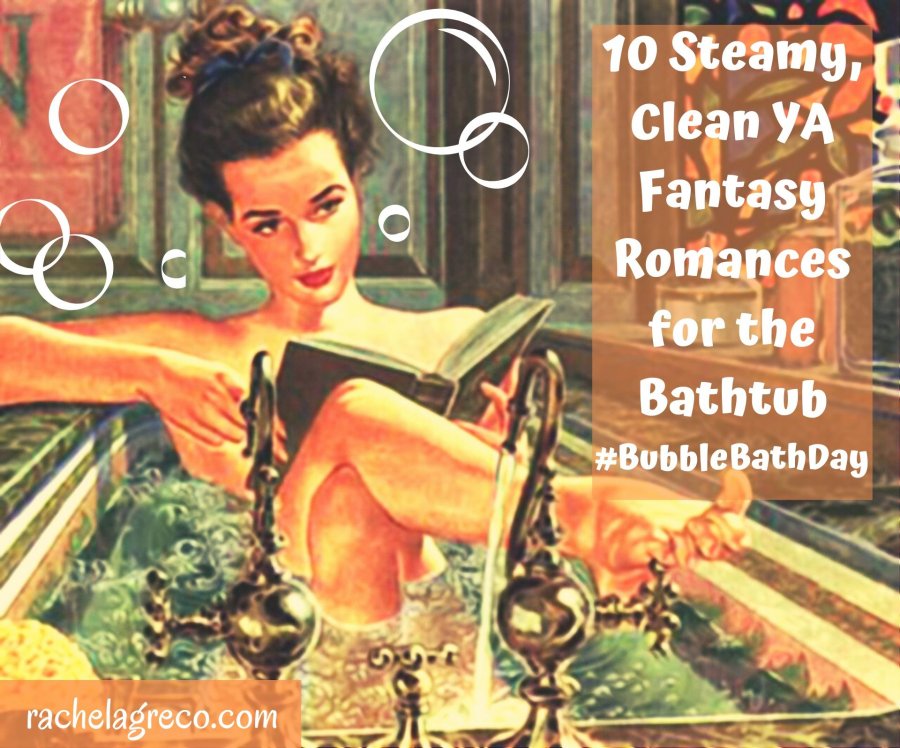 I don’t read books in the bathtub–I’m afraid they’ll fall in!–but if I did, these would be the ones I’d settle down with for a long soak. Note that some of these books, because they’re the first of a series, don’t begin super steamy. But sparks do fly in the sequels.

Beauty by Robin McKinley: You can’t get more romantic than a Beauty and the Beast retelling!

Cinder by Marissa Meyer: This is one of my favorite fairy tale retellings. Each novel in the series (four total) contains its own romantic fairy tale and all are written in a futuristic world. Each one is steamy in its own way.

Divergent by Veronica Roth: Nothing says love more than facing the end of the world together. Although, if I remember correctly (it’s been too long since I’ve read this series), the romance doesn’t warm up much till the next book, Insurgent.

Matched by Ally Condie: In this novel, your mate is chosen for you. Is there a place for true love in such a world? There’s only one way to find out! (Beware: a love triangle lays inside).

Seven Tears Into the Sea by Terri Farley: This book is a gem. The MC, Gwen, has an encounter with a boy on the beach when she’s young. She hasn’t seen him until she turns seventeen and returns to the sea. Who is the strange boy?

The Scorpio Races by Maggie Stiefvater: I adore this book! It has everything I love–horses, the ocean, magic, and a romance as dangerous and deep as the sea.

Ella Enchanted by Gail Carson Levine: This is one of those books that made me fall in love with reading growing up. Once you pick it up, you won’t be able to stop yourself from falling in love with a certain prince…

The Arrow and the Crown by Emma C. Fox: A girl trying to save her kingdom from an evil beast. A man who’s not who he says he is… I can feel the sparks from here!

Snow Like Ashes by Sara Raasch: An orphan from the Kingdom of Winter loves her prince. But, as an orphan, she’ll never be good enough for him. Or will she? There’s another love-triangle inside, but it’s not as all-consuming as the one in Matched.

The Goose Girl: Another classic fairy tale retelling where a kingdom is in peril and the male MC is not who you expect. The goose girl also has the ability to communicate with the wind, so that’s extremely cool. Like in the Cinder series, each of these four books contain their own romantic revelries.

What book would you most want to read in a bubble bath?