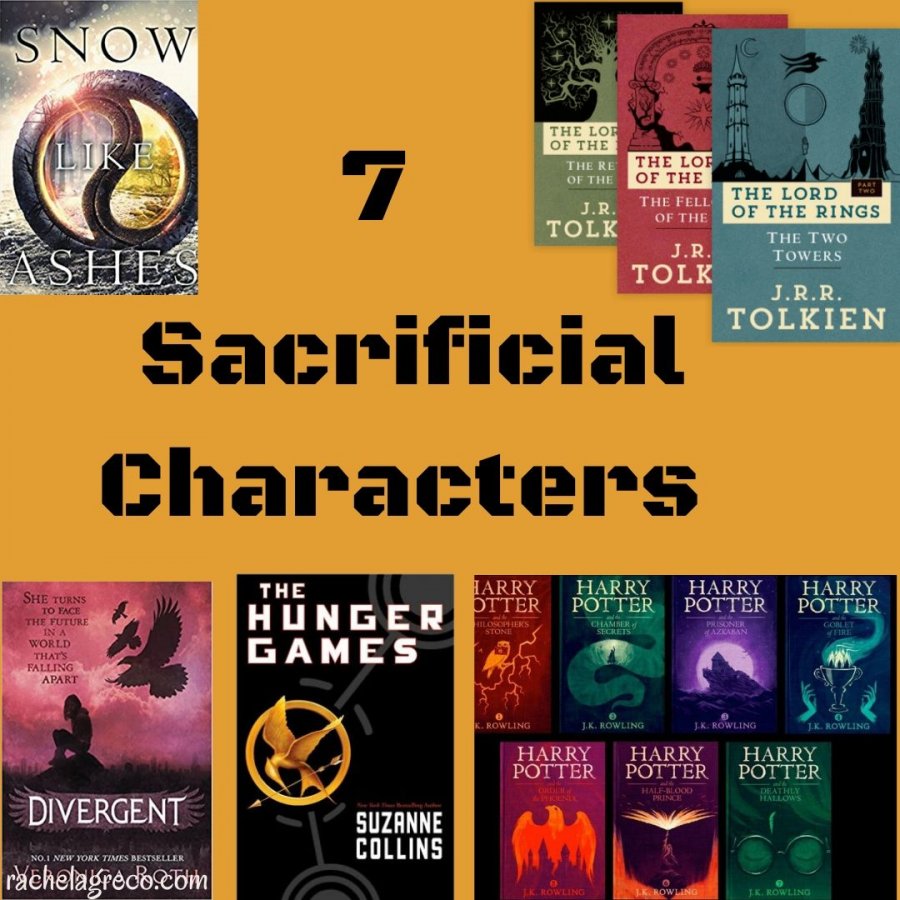 The books I return to time and time again are often those that possess characters who are willing to give up everything for the good of their world, family, or beliefs. They consider others more important than themselves–a trait most humans can resonate with. The following list is just a microscopic view of the plethora of sacrificial characters in the fiction world!

2. Frodo: There are many characters who sacrifice things in the quest to destroy the ring in The Lord of the Rings, but Frodo gives more. He must wear the ring constantly, sacrificing his mental, emotional, and spiritual health in the process.

3. Samwise Gangee: Probably my favorite character in the Lord of the Rings series, Samwise sacrifices everything in his loyalty to Frodo and the quest to save their world. This is evident when he carries Frodo at the end of the last book–doing all he can for his friend and loved ones back home. You gotta love Sam!

4. Tris: Throughout the Divergent series, especially in the latter books, Tris makes sacrifices to save those in her faction. The sacrifice in Insurgent may have been a bit unwarranted and brash, but in Allegiant, she makes the supreme sacrifice and saves her world.

5. Meira: Meira is at first loathe to make the sacrifice needed to save her people. I couldn’t blame her–who wouldn’t balk at the thought of giving your life? I appreciate that she didn’t take the task lightly, and that we get to watch her wrestle with it throughout the Snow Like Ashes series.

6. Katniss: I often forget the sacrifice Katniss made at the very beginning of the Hunger Games series due to everything that occurs throughout the action-packed novels. But what catapulted her into this revolution was her sacrifice to take her sister’s place. All she wanted was to save her sister’s life–at the expense of her own. How beautiful is that?

7. Mags: Although not a main character in the Hunger Games trilogy, Mags is likely to steal your heart in the way she allows herself to die so Katniss and Peeta can live and finish the rebellion they inadvertently began at the first games.

Who are some of your favorite sacrificial characters?