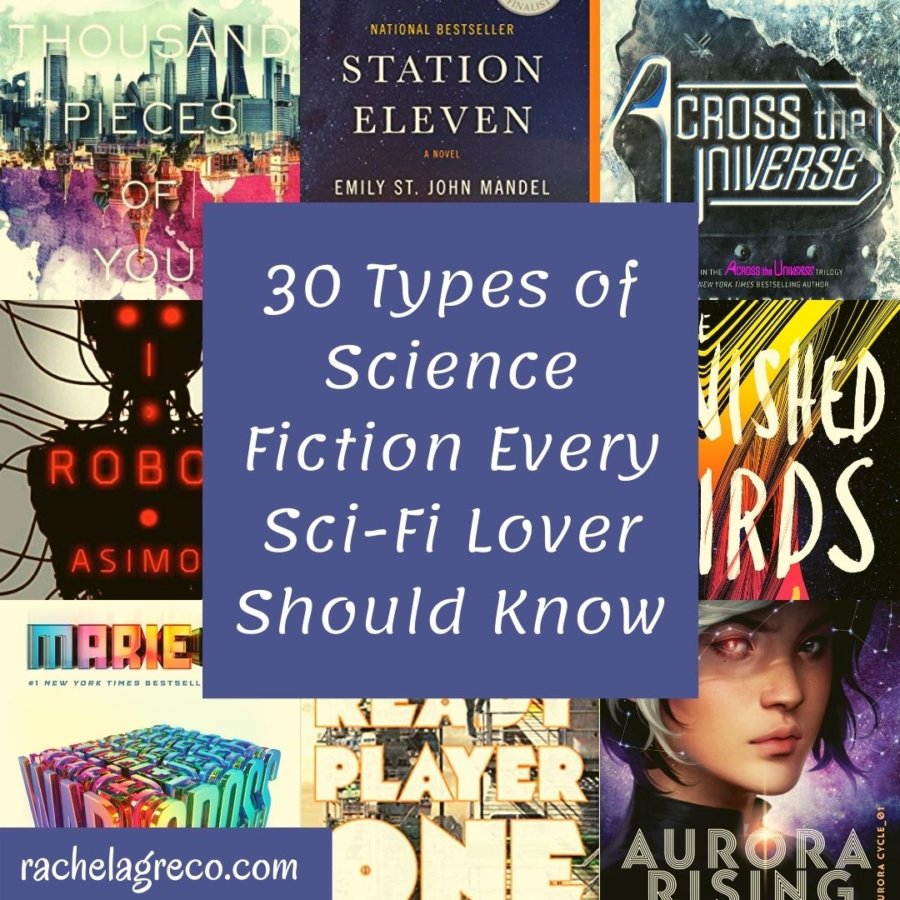 Some of the common tropes (a literary device used repetitively) in sci-fi you might recognize are: oxygen leaks, time travels, wicked robots/Artificial Intelligence, and faster than light (how else can the characters save the galaxy?).

Much like how fantasy has two main broad categories–high and low–so does sci-fi. But the two overarching categories in sci-fi are hard and soft and does not refer to the texture of anything in the story ;).

Hard science-fiction is for the science-lovers and nerds :). In these books/movies, the creators are concerned with as being as accurate with every scientific detail as possible and includes the more ‘exact’ sciences such as technology and the natural sciences. Soft sci-fi is more concerned more about the less exact sciences: sociology, anthropology, or psychology and less about getting all the technical details accurate.

Like fantasy, sci-fi is comprised of many sub-genres, all of which could fit either in the hard or soft categories. For a more complete list of all sci-fi subgenres, click here.

Alien Invasion: An often technologically-superior extraterrestrial society invades Earth with an evil intent, whether to enslave humans, eat them, or use the planet for some other destructive purpose.

Examples: Skyward by Brandon Sanderson, The Sound of Stars by Alechia Dow

Alternate History: This sub-genre asks the question: What if history had occurred differently? This type of fiction consists of a change that causes history to diverge from the history we know.

Examples: The Blind Assassin by Margaret Atwood, Farnham’s Freehold by by Robert Heinlein

Alternate/Parallel Universe: This type of fiction has a self-contained separate reality coexisting with our own and can vary from a small geographic region to an entire universe.

Examples: The Space Between Worlds by Michaiah Johnson, A Thousand Pieces of You by Claudia Gray

Apocalyptic/Post-Apocalyptic: Apocalyptic stories are set in a world that touches on the end of civilization, through nuclear war, plague, or some other disaster. Post-Apocalyptic is set in a place where such a disaster has already occurred, where the survivors have to deal with the aftermath, whether days after the disaster or years.

Colonization: Life forms (usually humans or insects) move into a distant area where their kind is sparse or not yet existing and set up new settlements in the area.

Cyberpunk: This name comes from cybernetics (replacing parts of your body with machinery, like a cyborg) and punk. It features advanced technology–computers or information technology–coupled with some degree of breakdown in the social order. The main characters are often marginalized, alienated loners who live on the edge of society.

Examples: The Dying Earth by Jack Vance, The Time Machine by H.G. Wells

Dystopia: Some people argue that this is a genre all on its own under the Speculative Fiction umbrella. Regardless, many sci-fi books fall into this category, where the world is opposite of a utopia: more of a nightmare. Oftentimes, the world is shown to be good/perfect/utopian, but the reader soon finds out it isn’t. (Fun fact: this is the sci-fi genre I’ve read the most of).

Examples: Scythe by Neal Shusterman, The Giver by Lois Lowry

First Contact: Features the first meeting between humans and aliens (or any two sentient races). Unlike Alien Invasion, the aliens in this subgenre aren’t necessarily hostile.

Generation Ship: A subgenre in which characters travel on a type of starship called a generation ship much slower than light between stars. Because they’re traveling so slow and it could take thousands of years to reach their destination, the original occupants would die during the journey, leaving their descendants to continue traveling (that’d be rough!)

Examples: Hull Zero Three by Greg Bear, Across the Universe by Beth Revis

Human Development: Books in which science or nature has given humans enhanced mental or physical abilities.

Examples: Climbing Olympus by Kevin J. Anderson, City at the End of Time by Greg Bear

Immortality: Stories that explore what form an unending or indefinitely-long human life would take, or whether it’s even possible.

Examples: The City and the Stars by Arthur C. Clarke, How to Stop Time by Matt Haig

Examples: Hitchhiker’s Guide to the Galaxy by Douglas Adams, The Cat Who Walks Through Walls by Robert A. Heinlein

Military: War, as the solution to either interstellar or interplanetary conflict, makes up the main or partial plot of these stories. The main characters are often part of the military.

Mundane: Characters remain on earth in this subgenre, and there’s a believability of the use of science and technology at the time the book’s written.

Mutants: Characters who exhibit powers often like superheroes. Unlike the human development subgenre, these powers come about more naturally, as opposed to via experiments. Think zombies more than Teenage Mutant Ninja Turtles (unfortunately).

Examples: I am Legend by Richard Matheson, The Strange Case of Dr. Jekyll and Mr. Hyde by Robert Louis Stevenson

Nanotechnology: Books that focus on this kind of science, which is about designing and producing devices and/or systems on the nanoscale (which is extremely small!)

Near-Future: These stories take place in the present day or in the next few decades, and the setting should be somewhat familiar to the reader. The technology is often current or in development.

Robots and Androids: Books all about robots and androids!

Examples: I, Robot by Isaac Asimov, Rebelwing by Andrea Tang

Science-Fantasy: This subgenre represents works that use main elements of both genres to create a story that is futuristic and technical with fantastical subplots and characters. Or a book that contains, according to Arthur C. Clarke, “any sufficiently advanced technology [that] is indistinguishable from magic.”

Space Exploration: This one’s pretty straightforward. Any story that touches upon the act of exploring space, including all the politics, science, and engineering behind space flight. Let’s go touch the stars!

Examples: The Martian Chronicles by Ray Bradbury, The Sparrow by Mary Doria Russell

Space Opera: I had heard this term quite a bit, but didn’t know what it meant. Space operas are usually set in outer space or on a far-flung planet. These are adventurous books that emphasize space warfare, drama, interplanetary battles, chivalric romance, and large stakes. It’s often soft science, but not necessarily.

Steampunk: Very similar to the subgenre in fantasy, where the focus is on steam-powered technology. However, unlike in the fantasy subgenre, the focus is more on the science and how the technology works. The line between the two is blurry, though!

Examples: Boneshaker by Cherie Priest, Shadows of Self by Brandon Sanderson

Terraforming: Books about modifying a planet or moon so it’s more habitable.

Examples: Ringworld by Larry Niven, Dying of the Light by George R.R. Martin

Time Travel: Moving between different times or universes. (In fantasy, it’s called portal and doesn’t have to do with science).

Uplift: When an advanced civilization helps the development of another one, by giving a non-sentient species sentience, spacefaring capabilities, or some other help.

Utopia: Unlike dystopia, in which the world is supposed to be perfect but has gone awry, in utopia books the world is still perfect.

Examples: Men Like Gods by H.G. Wells, The Memory of Earth by Orson Scott Card

Virtual Reality: Books in which virtual reality (a technology which allows a person to interact with a computer-simulated environment) plays an integral part of the plot and/or setting.