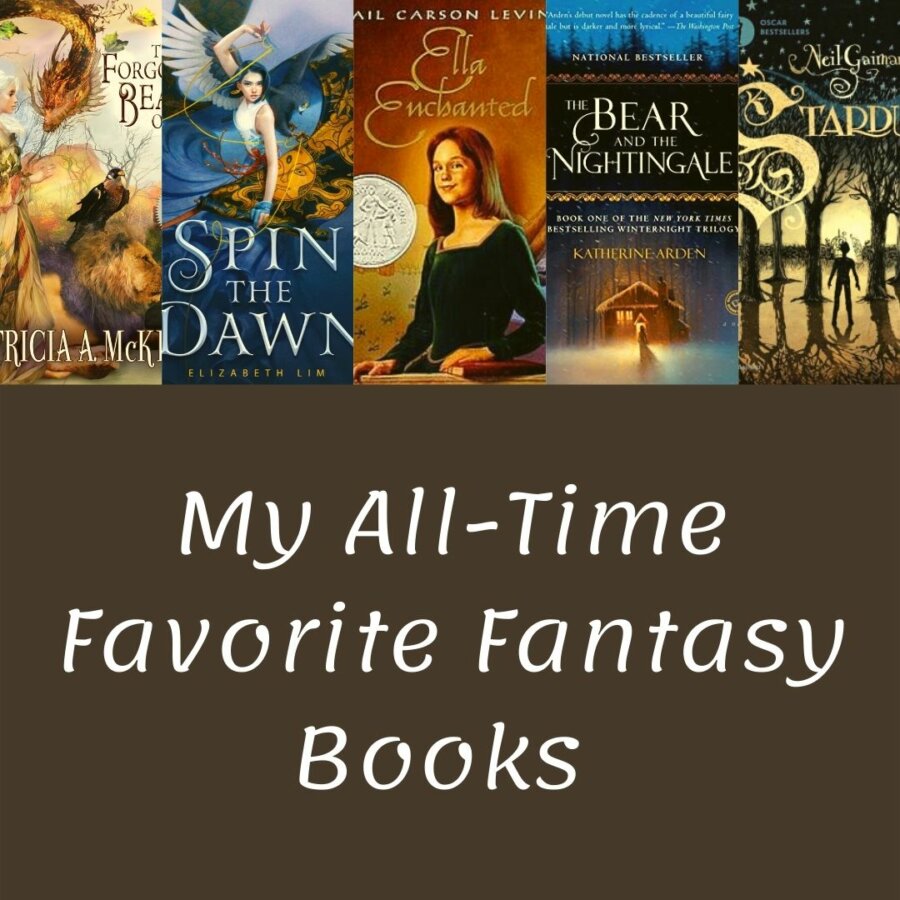 What are the books that you return to over and over again? Or the books that hold a special place in your heart because through them you learned to read or they were a favorite story of a loved one? It should be no surprise if you’ve read any of this blog before, but fantasy is my favorite genre. There are many other books I could have listed as my favorites, but to save your poor eyes, I’ve stuck to the ones that I’ve reread the most or plan on diving back in as much as possible. Enjoy!

The Chronicles of Narnia by C.S. Lewis: What a lovely, classic series! I didn’t appreciate the stories until I was older. When I first read Lucy and Tumnus’ tale in The Lion, the Witch, and the Wardrobe as a kid, the scene with Aslan and the Witch terrified and sickened me. Thankfully I gave it another chance, and it’s one of my favorite series.

The Hobbit by J.R.R. Tolkien: Of course one of Tolkien’s books had to make it on the list! This is my favorite of the LOTR series because it just has so much adventure, Bilbo’s hilarious, and there’s a DRAGON. I also didn’t read it as a child (could any child nowadays?), and I’m so glad I read it and the entire series as a teen.

Ella Enchanted by Gail Carson Levine: I’ve read this fairy-tale retelling of Cinderella probably more than any book I own (besides my Bible). It’s the book that first introduced me to the beauty and magic of fairy tale retellings.

The Two Princess of Bamarre by Gail Carson Levine: This is a sweet story of two sisters, one who must face her fears, and the other who must fight against a dangerous illness until her sister can find a cure. I love the bond between these two and the adventures that the protagonist has.

Princess Academy by Shannon Hale: This author introduced me to the beauty of writing with her lyrical language. I emphasized with how Miri didn’t quite fit in in this story and how unlikely she would succeed at becoming a princess. But she was much smarter than I was at her age! 😉

The Goose Girl by Shannon Hale: Another beautifully-written book (and series) where the main characters have special powers, all to do with natural elements. I love the weaving of nature into the plot and powers found in these books and how there are repercussions for using them. I could list at least another two of Shannon Hale’s books, but I’ll restrain myself and leave it at two.

The Harry Potter series by J.K. Rowling: I didn’t meet Harry until I was in high school, but I’m so glad I did! These books have everything in them I love: lighthearted, pure fun, a hugely descriptive magical world (all that food she came up with-wow!), life-like characters, deeper themes of love, goodness, friendships, and family, and a dash of romance and drama. Although I adore every book in the series, The Goblet of Fire is probably my favorite (though the ending isn’t very suitable for children).

Willa of the Wood by Robert Beatty: A newly acquired favorite which takes place in the unique location of the Smoky Mountains, which also happens to be only a few hours of where I currently live. I adore Willa’s fierce determination, how she finds family at the end, and Beatty’s lovely descriptions of nature. This is such an entrancing book that I’m sure to revisit over the years when I need to slow down and escape to the woods.

Eragon by Christopher Paolini: This was probably the first epic series I read, and the first one with DRAGONS. And not only dragons, but also elves, gnomes, and other creatures I’d never heard of before. Paolini’s world was a delight to run off to with its depth and richness. For a few hours, I could pretend that I also had a dragon and could hear her thoughts and soar through parchment-thin skies (and maybe I still do… ;).

Steelheart by Brandon Sanderson: Superheroes! But superheroes that act more like villains, which is a novel concept. Sanderson’s writing isn’t the most lyrical, his descriptions aren’t astounding in their cleverness, but his characters are so much fun, and his worldbuilding is phenomenal. This book (and series) has so many twists, and the MC is just a hoot with his horrible metaphors.

Spinning Silver by Naomi Novik: A stunning retelling of Rumpelstiltskin with imagery as rich as gold and silver and an ending that took me delightfully by surprise. Spinning Silver made me want to gobble up every one of Novik’s books!

Uprooted by Naomi Novik: Another gorgeous fairy tale-like story with a hilarious main character. Agnieszka is one of my favorite characters with her awkward clumsiness, and her magic is just like her.

Songflight by Michelle M. Bruhn: More dragons! This is one of the best dragon-based fantasies I’ve read because the world building is so thorough, the characters are as complex as you or I, and the themes as lovely as the music Michelle wrote just for this book. This is the only Indie-published book on this list, and it definitely deserves this spot!

The Young Elites by Marie Lu: I love pretty much all of Marie Lu’s books, and it’s a little odd that her darkest one made it on this list. This entire series reaches deeper than her other novelsa–into the very core of humanity. I love how it shows the darkness that lies in every one of us, yet doesn’t leave us in those shadows, but gives us a chance for redemption. Beautiful!

Cinder by Marissa Meyer: More fairy tales! Are you sensing a theme here? 😉 Meyer has conquered the ability to take a fairy tale that has been retold probably hundreds of times and make it a story all on its own while keeping with the most traditional/familiar aspects of the fairy tale. I loved how each book in this series is about a different character and fairy tale–it’s own story–yet they all make up the overarching story of Cinder and Kai. That’s exquisite storytelling!

The Bear and the Nightingale by Katherine Arden: A lush, atmospheric wintery tale that takes place in old Russia. Not only do we learn about folklore from this book, we also get to learn about Russia’s history and culture. I adore the legends woven into this story and the battle between traditional/secular and contemporary/religious ways of life. Very fascinating.

The Kingdom of Back by Marie Lu: Another historical fantasy novel, this one, though, will take you to Austria during the days of Mozart and his sister, Nannerl. I love how this book doesn’t focus on romance like most YA books, but a brother-sister relationship. The mood is dreamy and mysterious and nothing like anything I’ve read before. It may even beat The Young Elites!

Spin the Dawn by Elizabeth Lim: I recently came across this novel and was so impressed by Lim’s storytelling! She expertly weaves fierce, mysterious characters, ancient Asian folklore and culture, and a little-known fairy tale together to spin a story that shook my world.

Beauty by Robin McKinley: A lovely retelling of the best fairy tale: Beauty and the Beast. McKinley’s tale is simple, yet sweet and alluring like a piece of chocolate. Delicious!

The Scorpio Races by Maggie Stiefvater: Something else that’s delicious is humans to the dangerous horses that live in the seas surrounding Puck’s island. I love the wildness of Puck, her island, and the sea she lives near. When I first read this book, I thought the island might be a real place because Stiefvater did such an excellent job capturing the details of the November cakes, the freshness of the cliffs, and the races. I’d love to visit, but not to live there!

The Forgotten Beasts of Eld by Patricia A. McKillip: I can hardly remember this book now, it’s been such a long time since I read it. But I do remember the beauty of the writing, the vibrant, heart-thrumming themes, and importance of animals. A classic fantasy that I must reread.

Elantris by Brandon Sanderson: Any book’s of Sanderson’s could be on this list, and I was torn between Elantris and the Mistborn series, but I love a good stand-alone novel, and Elantris has it all: superb worldbuilding, characters that surprise and wow the reader, a fascinating plot, riveting action that will beg you to stay up way too late, and a smattering of romance.

Circe by Madeline Miller: The greek gods and goddesses take on new life in this novel about one little-known goddess. I was impressed with how Miller wrote about thousands of years and yet kept the reader interested. I was surprised at how much I enjoyed this book, since it’s not as action-packed as many others I’ve read.

Stardust by Neil Gaiman: I love the lightheartedness of this tale and all the magical beings and adventures Tristan has while searching for a fallen star. This is just pure fun, good fantasy!

The Lord of the Rings by J.R.R. Tolkien: And of course, the ultimate fantasy series about quests and saving the world. I couldn’t have an all-time favorite fantasy book list without this series! It not only ticks all the boxes (of worldbuilding, complex characters, lovely writing, etc.), but soars right over them. One of my favorite parts is the poetry he includes. And I suppose it’s mostly due to Tolkien that there are so many fantasy books out in the world to enjoy today.

What are some of your all-time favorite fantasy books?

30 Types of Science Fiction Every Sci-Fi Lover Should Know

10 Books to Take on a Road Trip