1st in a Series

Twice-orphaned Sylvi has chipped out a niche for herself on Layce, an island cursed by eternal winter. Alone in her truck, she takes comfort in two things: the solitude of the roads and the favor of Winter, an icy spirit who has protected her since she was a child.

Sylvi likes the road, where no one asks who her parents were or what she thinks of the rebels in the north. But when her best friend, Lenore, runs off with the rebels, Sylvi must make a haul too late in the season for a smuggler she wouldn’t normally work with, the infamous Mars Dresden. Alongside his team—Hyla, a giant warrior woman, and Kyn, a boy with skin like stone—Sylvi will do whatever it takes to save her friend.

But when the time comes, she’ll have to choose: safety, anonymity, and the favor of Winter—or the future of the island that she calls home.

What a great winter read! The entire island is cloaked in snow and ice for much of the year, thanks to the spirit, Winter. I loved the idea of this magical spirit that’s a season but so much more; Dittemore does a superb job of making the reader question along with Sylvi if Winter is a friend or foe. The lore was masterfully thought out, though at times I was confused about who the different people groups were and why they hated each other, but that could have just been due to my exhausted brain ;).

I enjoyed the worldbuilding, and many things were just touched on briefly that will no doubt be explained more in depth in the sequel. The people made partly out of rock was unique and fascinating, though I’m not sure what purpose that serves in the story. 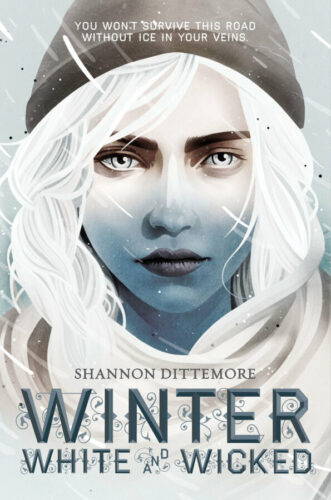 I had a difficult time connecting to any of the main characters, especially Mars’ crew. It wasn’t clear to me why their harsh and brutal actions were necessary, especially those belonging to Mars. I didn’t feel much empathy for them.

The romance–which remained a subplot, thankfully–just didn’t click for me. I struggled with seeing how Sylvi could feel attracted to the guy. It felt too sudden and out of the blue and almost forced by the author. Not every YA fantasy book needs to have romance!

Throughout Winter, White and Wicked, I thought I wouldn’t want to read the sequel because I felt fairly ambivalent to the characters and the fate of the world. However, by the end, my curiosity was piqued for what will happen to Sylvi and those she’s begun to care about. I’m still not sure if I want to continue the journey with this cast of characters, but it is a fast-paced read perfect for relaxing with next to a crackling fire.

What books are you hoping to read this winter?

YA Fantasy Book Review: Once Upon a Broken Heart

Cinderella Fairytale Book Review: The Shadow in the Glass