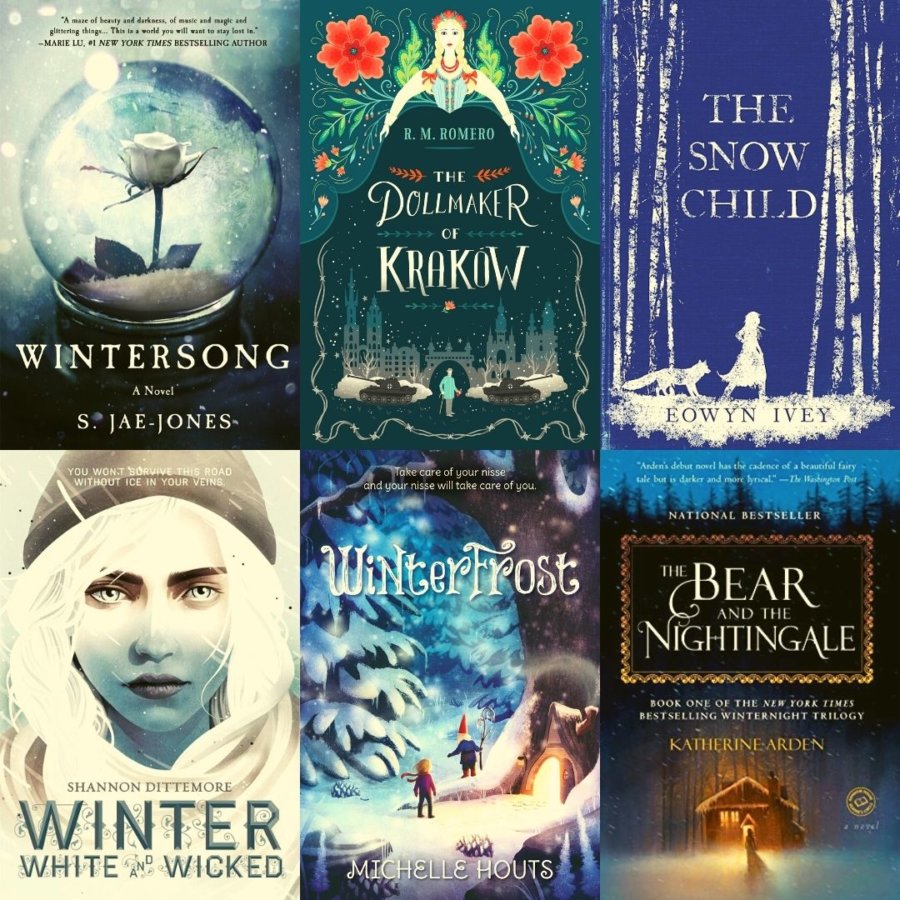 There’s something about the serene silence of snow-encrusted woods and the icy brightness of stars in winter that speak of magic and peace. Although I didn’t grow up with a lot of snow in Texas and we hardly get any here in the lowlands of North Carolina, there’s something in me that longs for hearty crackling fires, snowy woods, and hot beverages this time of year.

So what to do when you can’t find these elements? Read about them, of course! The books in this list contain some kind of wintery element, and whether you live in the tropics and are longing for some invigorating cold or just want to escape into another world for a bit, I hope you find one to add to your list or to revisit!

WinterFrost by Michelle Houts: A folklore/legend fantasy in which Bettina’s family fails to set out the traditional Christmas rice pudding for the little nisse that guards the family and livestock. It’s not long before the nisse’s magic shows up, and to set things right, Bettina must venture into the world of these mischievous creatures.

The Dollmaker of Krakow by R.M. Romero: In this historical fantasy, the doll, Karolina, and her new powerful dollmaker friend must help their Jewish neighbors in Poland escape their neighbors. A darker, yet hopeful winter story.

Winterwood by Shea Ernshaw: The Walker women have always shared a special connection with the woods. In the middle of a snowstorm, Nora happens upon a boy who should be dead. Secrets abound, and the wood is not happy.

Girls Made of Snow and Glass by Melissa Bashardoust: This fairy tale retelling of Snow White follows two girls: one who’s heart is made of glass and one crafted out of snow in her mother’s image. Who will win the throne?

Sky in the Deep by Adrienne Young: Eelyn joins her Aska clansmen in fighting their ancient enemies every five years. That is, until she spends a winter with her enemies and learns about a darker enemy that can only be defeated if the clans fight together.

Spinning Silver by Naomi Novik: One of my all-time favorite fantasy books. Based on the fairy tale of Rumpelstiltskin, Miryem must ‘spin’ silver into gold for an icy fey creature. Torn between deadly choices, she’s taken to the limits of sacrifice, power, and love.

Winter White and Wicked by Shannon Dittemore: When Sylvi’s best friend runs off with rebels, Sylvi befriends an unlikely team of smugglers to rescue her friend.

Wintersong by S. Jae-Jones: All her life, Liesl has heard tales of the beautiful, dangerous Goblin king. But when her sister is taken by the king, Liesl travels underground and finds herself in a strange, captivating world and must make an impossible choice.

The Bear and the Nightingale by Katherine Arden: An enchanting historical fantasy based off a Russia where myth and magic are alive. Vasilisa must use all her ability to see the forest and household creatures to protect her family and village from fear and those who would destroy them.

The Lion, The Witch, and the Wardrobe by C. S. Lewis: You can’t have winter fantasy without this book! A classic that follows four children into the magical world of Narnia, where they must help break the White Witch’s wintery grasp. (Although the book was written for children, I list it under YA because the vocabulary would be too much for most children today. And the pictures line up better this way ;)).

The Snow Child by Eowyn Ivey: In Alaska, 1920, Jack and Mabel create a child out of snow. To their shock, it becomes a real child. Jack and Mable begin to love her as their own, but in this dangerous world, things are not often what they seem.

Norse Mythology by Neil Gaiman: What could be more wintery than tales of Odin, Thor, Loki, and dwarves and giants in this land cloaked in snow and ice most of the year?

Have you read any of these books? Which looks the most intriguing to you?