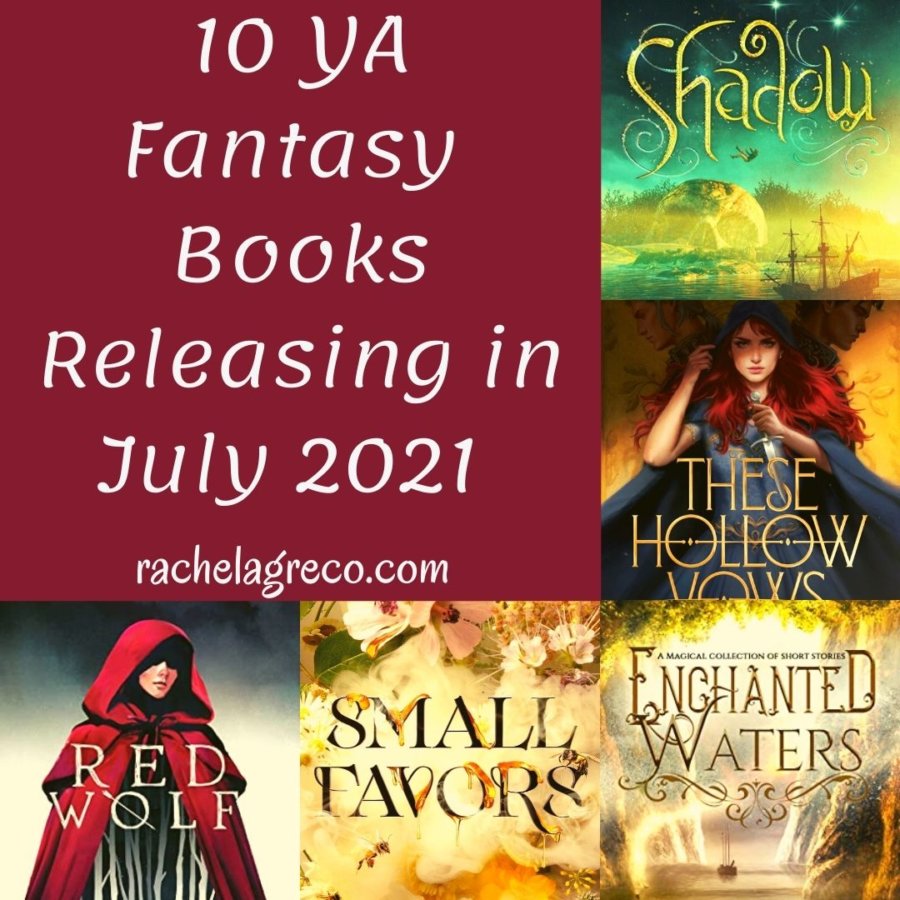 Almost nothing is as exciting as diving into a new book, and there are some awesome-looking fantasy books releasing this month! What a better way to spend the long, summer days than with a new story? Some of the books are by authors I love, and some are by new authors that look phenomenal. I hope you see a title that grabs your attention to add to your TBR list!

Shadow by Kara Swanson: The much-anticipated sequel to the Peter Pan retelling, Dust. Peter has crash-landed back on Neverland, but the island is different than he remembers. To rescue Neverland from the inescapable shadow, the boy who never grew up and the girl who grew up too fast will have to sacrifice the only thing they have left: each other.

I can’t wait to journey to Neverland and see what happens to Claire and Peter Pan!

These Hollow Vows by Lexi Ryan: Dangerously seductive fae princes and a girl caught between them and their treacherous courts? Yes, please! Also, what a gorgeous cover.

Red Wolf by Rachel Vincent: Guess what retelling this book’s about? Yep. Little Red Riding Hood. Adele’s village has been surrounded by a dark wood filled with terrible monsters, but the wood doesn’t frighten Adele, because she can turn into a wolf.

That’s right! A wolf. How neat is that? This sounds like Uprooted, but with more monsters.

Curses by Lish McBride: A gender-swapped Beauty and the Beast retelling in which Merit Cravan refused to fulfill her obligation to marry a prince, leading to a curse. She will be forced to live as a beast forever, unless she agrees to marry a man of her mother’s choosing before her eighteenth birthday. Tevin Dumont has always been a pawn in his family’s cons. But after his mother runs afoul of the beast, she decides to trade Tevin for her own freedom.

I’m a sucker for Beauty and the Beast retellings, so I’m really looking forward to this one, especially the gender swap and con-artist love interest.

Six Crimson Cranes by Elizabeth Lim: This is the release I’m most excited to read because I loved the Spin the Dawn duology so much. Six Crimson Cranes is another Asian fairy tale retelling, this one about Princess Shiori’s forbidden magic that gets her banished by her stepmother and her brothers turned into cranes. While searching for her brothers, Shiori uncovers a conspiracy to overtake the throne.

Enchanted Waters: An anthology of fantasy short stories related to water and decorated with illustrations. Doesn’t that sound like pure magic and the perfect book to read in the summer? Also, all the proceeds go to helping protect oceans. What a great reason to buy a copy.

Falling and Uprising by Natalie Cammaratta: The first in a dystopian-like series, where Serenity Ward never questioned her city’s status as the last dry land on earth. Until she sees a map.

Song of the Forever Rains by E.J. Mellow: This dark romantic fantasy about a young woman finding hope in her powers of destruction sounds intriguing!

Small Favors by Erin A. Craig: When a supply party goes missing, some worry that the monsters that once stalked the region where Ellerie lives have returned. More strange activities point to a tribe of mystical creatures who promise to fulfill the residents’ deepest desires, for just a small favor. But their true intentions are more sinister, and Ellerie finds herself in a race against time before her town, her family, and the boy she loves go up in flames.

I loved Erin A. Craig’s House of Salt and Sorrows, so I can’t wait to return to a new slightly-creepy, magical world she crafted. Also, monsters!

Strange Gods by Alison Kimble: Spooky attends a wilderness boot camp for troubled teens, determined to start over. But while she’s hiding from another camper, something ancient and powerful finds her.

I kind of want to read this book just for the character’s name alone. How’d Alison Kimble land Spooky? Also, more monsters (aka gods)! I don’t know what it is with me and monsters, but for some reason, I’m in the mood for epic battles.

Which of these books will you add to your TBR list?