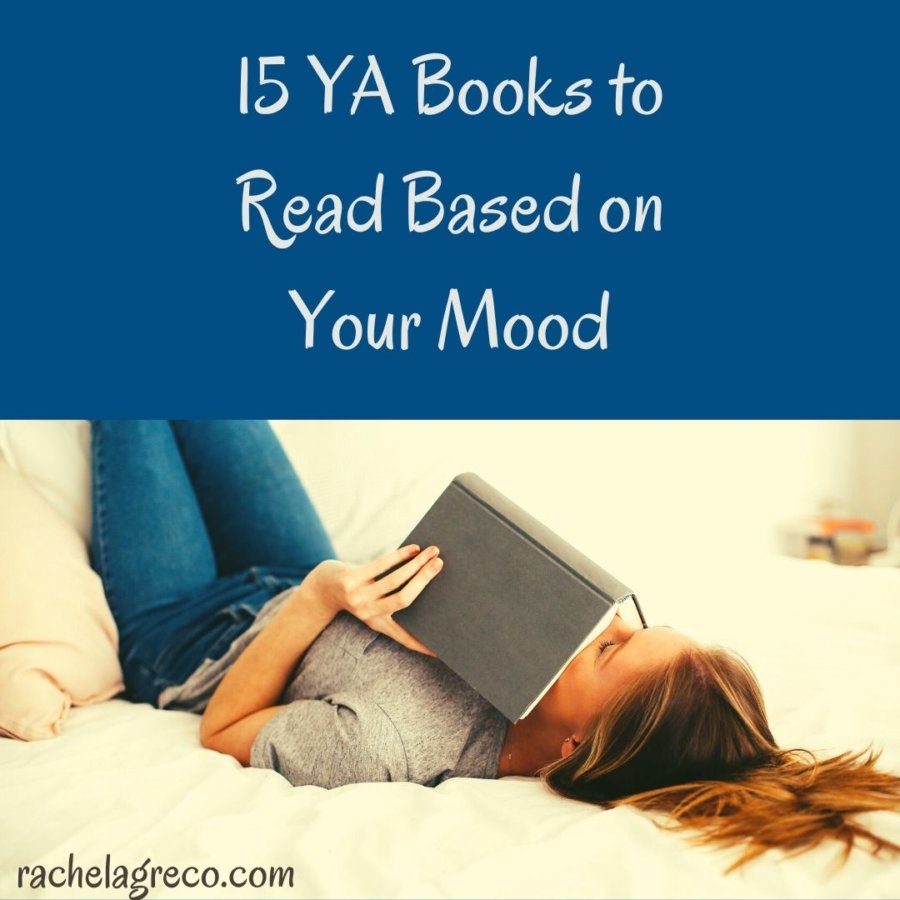 How do you choose what book to read next? Usually I pick up one that I’ve been dying to read or is next on my TBR list. But occasionally I crave a certain kind of book based on what kind of mood I’m in. So whether you’re a mood reader or just want to dabble in a different genre, here are 15 books to read for any kind of mood that might draw you in. Enjoy!

Romantic: Caraval by Stephanie Garber
I was actually surprised by how much romance Garber sprinkled throughout this exciting ride of a novel. While Scarlett Dragna attempts to find her sister at Caraval, she meets a man who contains more depth than she expected. Sparks fly while secrets simmer. (It’s even pretty clean for YA!)

Action/Adventure: Uglies by Scott Westerfeld
In this YA dystopian, Tally leaves her world of order behind to find her friend Shay and obtain the operation that will make her beautiful. But on the way, she encounters a real, untamed, world and people that will shape her meaning of the word beautiful.

Something Familiar: Ella Enchanted by Gail Carson Levine
This charming, fun Cinderella retelling was one of my favorites growing up and still is. If you’ve read it a million times or never have picked it up, it’s always a good comforting, lighthearted read.

Enchanting: Uprooted by Naomi Novik
So many fantasy YA/NA books are enchanting, but there’s something extra special in the local magic Agnieszka brings to the Dragon’s tower and the mystery surrounding the wicked Wood. Nothing is as it seems in this fairy-tale like story slathered with magic and mystery.

Humorous: Artemis Fowl by Eoin Colfer
It can be difficult to find solidly humorous books. But Artemis Fowl delivers it all: stealthy sass, surprised chuckles, and silly snorts (or maybe that’s just me ;).

Cozy: Spinning Silver by Naomi Novik
There’s nothing much cozier than curling up with a blanket and watching the Staryk king’s sleigh slide through the snow and Miryem attempt to turn silver into gold in this refreshing new twist on the Rumpelstiltskin tale. I can’t wait to read it again this winter!

Suspenseful: The Glass Arrow by Kristen Simmons
Although there’s no ghosts or other haunted beings in The Glass Arrow, it will still send shivers down your spine! This world, where females are hunted and sold to the highest bidder, is Aya’s–the main character’s–reality. Freedom is ever evading her, and she has several close encounters with those who wish her harm. You won’t be able to stop turning those pages!

Inspiring: Stargirl by Jerry Spinelli
Who doesn’t want to be like Stargirl, who unabashedly walks around while reading and randomly sings in the school cafeteria? I crave the courage and realness found in this character and hope to care about people as much as she does.

Hopeful: Songflight by Michelle M. Bruhn
You can tell, by how much I talk about this book on my blog, how much I adore it! Alísa’s life is rough: her family doesn’t understand her, she suffers from a speech impediment, and she must run away from all she knows. But through all the darkness between the dragons and humans, hope prevails!

Something Completely Different: Challenger Deep by Neal Shusterman
One of the reasons I read is to learn about other people and perspectives. This book opened my eyes to the challenges and struggles of schizophrenia as the main character, who’s based off Shusterman’s son, sinks deeper into this mental illness. The main thing that makes this book unique is how Shusterman compares schizophrenia with taking a ship to Challenger Deep–the deepest known point in the earth’s seabed. You won’t regret perusing this book!

Intricate Plot: Six of Crows by Leigh Bardugo
This book twists and turns like the rivers down here in South Carolina. I thought I knew how the break-in to the ice prison was going to happen, but Bardugo hid secret plans and motivations all over the place, like fireworks waiting to explode and wow you with their brilliance.

Short: Speak by Laurie Halse Anderson
Melinda is friendless and finds solace in her artwork. This creative outlet allows her to heal from the trauma inflicted on her just a few months prior to the story. This novel should be read by everyone, especially those who enjoy YA books.

Epic: Mistborn by Brandon Sanderson
Brandon Sanderson’s books are some of the best fantasy books I’ve read: thorough and unique world building, shocking plots, and characters who become like family. Once you dive in, you won’t want to come back out.

Tragic: Heartless by Marissa Meyer
Whimsical at first, this book follows Cath, a girl who only wants to open a bakery with her best friend in the land of Hearts. But about halfway through the novel, as Cath becomes more involved with a court jester and strays from her parents’ plans, her life begins to crumble like the treats she loves making. This book will tear your heart to pieces!

Heart-Warming: My Louisiana Sky by Kimberly Willis Holt
Tiger Ann Parker’s parents are mentally slow, earning her teasing remarks and odd looks by friends and strangers alike. When tragedy strikes, Tiger goes with her aunt to the big city and learns what’s truly important in life.

Have you ever picked a book based on your mood? What was it?

7 Male YA Fantasy Protagonists to Make You Swoon